“We achieved significant progress during the first half of 2022, continuing to execute on our goal of becoming a fully integrated, capital-efficient, commercial-stage biopharmaceutical company targeting rare and specialty disease indications. In particular, we have focused on preparations for the impending U.S. launch of PKU GOLIKE®, a differentiated medical food product engineered with the patent protected, proprietary Physiomimic drug delivery technology, for the dietary management of phenylketonuria (“PKU”), which is currently marketed in Europe, and we look forward to the U.S launch in the fourth quarter of this year, ” stated Raghuram Selvaraju, Ph.D., Chairman of the Board of Directors of Relief. “The planned commercial introduction into the U.S. necessitated an expansion of our sales organization and commercial capabilities, and we were pleased to have appointed a number of highly seasoned biotech executives to lead this effort. These included Christopher Wick as Executive Director, Head of U.S. Sales; Drew Cronin-Fine, as Executive Director, Head of U.S. Marketing; and David McCullough, as Senior Director and Head of U.S. Market Access, all reporting to Anthony Kim, Senior Vice President, and Head of U.S. Commercial Operations. We also acquired from Meta Healthcare Ltd. the worldwide commercialization rights (except in the UK) for a novel dosage form of an already FDA-approved prescription drug, intended for the treatment of patients with PKU, adding to our offerings and solidifying our position in this market. We anticipate filing for registration approval through a 505(b)(2) NDA during 2023, further evidencing our cost-effective approach to drug development.”

Dr. Selvaraju added, “Meanwhile, we continue to work closely with our partner, Acer Therapeutics Inc. (“Acer”), for a potential U.S. launch of ACER-001, a taste-masked, immediate-release, proprietary powder formulation of sodium phenylbutyrate (NaPB) to treat urea cycle disorders (“UCDs”). Acer resubmitted a New Drug Application (“NDA”) to the FDA under the 505(b)(2) pathway for ACER-001 in UCDs in July 2022. The FDA accepted the NDA and assigned a Prescription Drug User Fee Act (“PDUFA”) target action date of January 15, 2023. Assuming approval, we anticipate U.S. commercialization in the first half of 2023, marking an important milestone for the collaboration and representing our second commercialized product in the U.S. We also plan to submit a Marketing Authorization Application for approval of ACER-001 for the treatment of UCD in the U.K. and EU. Additionally, Acer submitted an Investigational New Drug (“IND”) application to the FDA to evaluate the safety and efficacy of ACER-001 for the potential treatment of Maple Syrup Urine Disease (“MSUD”). We anticipate clinical studies to begin in the fourth quarter of 2022 and expect that data from these studies would be suitable for product registration in the U.S. and Europe. During the year, we also significantly strengthened the intellectual property portfolio of ACER-001 with receipt of patents covering methods-of-use claims for the potential treatment of UCDs and MSUD.

“We also made progress in our program targeting pulmonary diseases. Importantly, we announced promising three-month initial stability data on a new formulation of RLF-100®, which appears to be shelf-stable at temperatures suitable for shipping and long-term storage, thus, potentially having significant clinical and commercial value. We intend to continue to develop RLF-100® for a range of lung diseases. The inhaled formulation of RLF-100® is presently being evaluated in a European study for COVID-19-infected patients (the “Leuppi Study”), for which we expect to report top-line data sometime before year end 2022, subject to completion of patient enrollment. Additional indications include, pulmonary sarcoidosis, for which we have Orphan Drug Designation (“ODD”), and for which, during 2023 we plan to initiate a phase 2b dose-ranging study in 72 patients. We expect to schedule a pre-IND meeting with the FDA to confirm the efficacy and safety endpoints as well as the proposed dosing regimen and, based on a positive outcome, expect to begin this phase 2b study during 2023. We plan to also explore RLF-100® for checkpoint inhibitor-induced pneumonitis, for the treatment of non-COVID-19-related acute respiratory distress syndrome (“ARDS”) and to conduct a European proof-of-concept of RLF-100® in the treatment of chronic berylliosis.

“In parallel to these activities, we continue to develop APR-TD011 for the treatment of epidermolysis bullosa (“EB”), for which we have received FDA ODD. Based on strong clinical results, GMP-grade pharmaceutical product is being prepared for clinical development under an FDA-authorized IND, with a clinical trial slated to start in the second quarter of 2023. Additionally, we will leverage our collaboration agreement with InveniAI LLC, a pioneer in the application of artificial intelligence which, we believe, will meaningfully complement our existing drug development expertise and generate numerous promising additions to our pipeline. We have also instituted an effort to pursue the inception and advancement of next-generation, disruptive genetic medicines, taking advantage of innovations in genetic technologies including gene therapy and genome editing to facilitate the development of potentially curative therapies for areas of high unmet medical need.

“Last year, we launched a Level 1 ADR program in the U.S. and are aggressively moving to a Level 3 ADR and an associated Nasdaq Stock Market listing, which we expect to occur in the fourth quarter of this year. To that end, on August 23, 2022, we filed an F-1 Registration Statement with the U.S. Securities and Exchange Commission to register our ADSs for sale in the United States. We ended June of 2022 with a solid cash position of CHF 29.9 million, providing a forecasted cash runway into the third quarter of 2023. We also expect that, with the launch of the PKU GOLIKE® franchise in the U.S. and a successful launch of ACER-001 in early 2023, Relief could achieve cash flow breakeven in late 2024 and positive operating cash flow in early 2025.

Today, we are a more mature, forward integrated, commercial-stage specialty drug company with a deep pipeline and multiple opportunities for growth and we will continue to actively pursue a strategy to diversify our pipeline and are continuously evaluating in-licensing and acquisition opportunities.”

Management and Board Additions

Relief is a Swiss, commercial-stage, biopharmaceutical company focused on identification, development and commercialization of novel, patent protected products intended for the treatment of rare and ultra-rare diseases including metabolic disorders, pulmonary diseases and connective tissue disorders. Relief’s diversified pipeline consists of assets that have the potential to effectively address significant unmet medical needs, including PKU GOLIKE®, engineered with the proprietary Physiomimic technology, which is the first prolonged-release amino acid product commercialized for the dietary management of phenylketonuria (“PKU”). Relief has a Collaboration and License Agreement with Acer Therapeutics for the worldwide development and commercialization of ACER-001 (sodium phenylbutyrate) for the treatment of various inborn errors of metabolism, including Urea Cycle Disorders (“UCDs”) and Maple Syrup Urine Disease (“MSUD”). Relief also continues to develop aviptadil for several rare pulmonary indications. Further, Relief is in clinical development for APR-TD011, a differentiated acid oxidizing solution of hypochlorous acid intended for the treatment of epidermolysis bullosa (“EB”), a group of rare, genetic, life-threatening connective tissue disorders; APR-TD011 has been granted Orphan Drug Designation by the FDA. Finally, Relief is commercializing several legacy products via licensing and distribution partners.

Disclaimer: This press release contains forward-looking statements. Forward-looking statements involve known and unknown risks and uncertainties, which may cause actual results in future periods to differ materially from forecasted results. A number of factors, including (i) whether the commercialization of PKU GOLIKE® in the United States will be successful, (ii) whether ACER-001 for the treatment of UCDs will be approved for commercialization in the United States and successfully commercialized, (iii) whether Relief’s current and future clinical trials and studies will be successful, (iv) whether the tentative settlement of pending litigation with NRx and NeuroRx will be successfully concluded, (v) whether Relief’s registration statement on Form F-1 will become effective and Relief will be able to successfully conclude an offering of its ADSs in the United States, (vi) whether Relief’s efforts to list its ADSs on the Nasdaq Stock Exchange will be successful, (vii) whether Relief will achieve breakeven cash flow and positive cash flow, and if so, whether such breakeven or positive cash flow will be achieved on the timetable described in this press release , and (viii) those factors described in Relief’s reports to the SIX Swiss Exchange and the Securities and Exchange Commission could adversely affect Relief, which could cause the actual results, financial condition, performance or achievements of RELIEF THERAPEUTICS Holding SA to be materially different from any future results, performance or achievements expressed or implied by such forward-looking statements. RELIEF THERAPEUTICS Holding SA is providing this communication as of this date and do not undertake to update any forward-looking statements contained herein as a result of new information, future events or otherwise. Copies of Relief’s filings with the SEC are available on the SEC EDGAR database at www.sec.gov.

This press release is not intended to and does not constitute an offer to sell or the solicitation of an offer to buy any securities in the United States or any other jurisdiction, nor shall there be any offer or sale of securities in the United States or any other jurisdiction in which such offer, solicitation, or sale would be unlawful unless registered and/or qualified under applicable securities laws. This press release does not constitute a prospectus according to art. 35 of the Swiss Financial Services Act dated 15 June 2018, as amended (“FinSA”), or art. 27 et seqq. of the SIX Swiss Exchange Listing Rules. There is no intention or permission to publicly offer, solicit, sell or advertise, directly or indirectly, any securities of Relief in or into Switzerland within the meaning of FinSA. Further, the ADSs have not been registered under the Securities Act of 1933, as amended (the “Act”), and no public offering of securities shall be made in the United States except by means of a prospectus meeting made available by Relief that contains detailed information about Relief and its management, as well as financial statements meeting the requirements of the Act.

Data Administration News for the 7 days of September 9 Updates from Alation, Denodo, TimeXtender, and Additional

Sun Sep 18 , 2022
The editors at Methods Critique have curated this listing of the most noteworthy facts administration information goods for the week of September 9, 2022. Maintaining tabs on all the most appropriate massive details and info management information can be a time-consuming task. As a final result, our editorial workforce aims […] 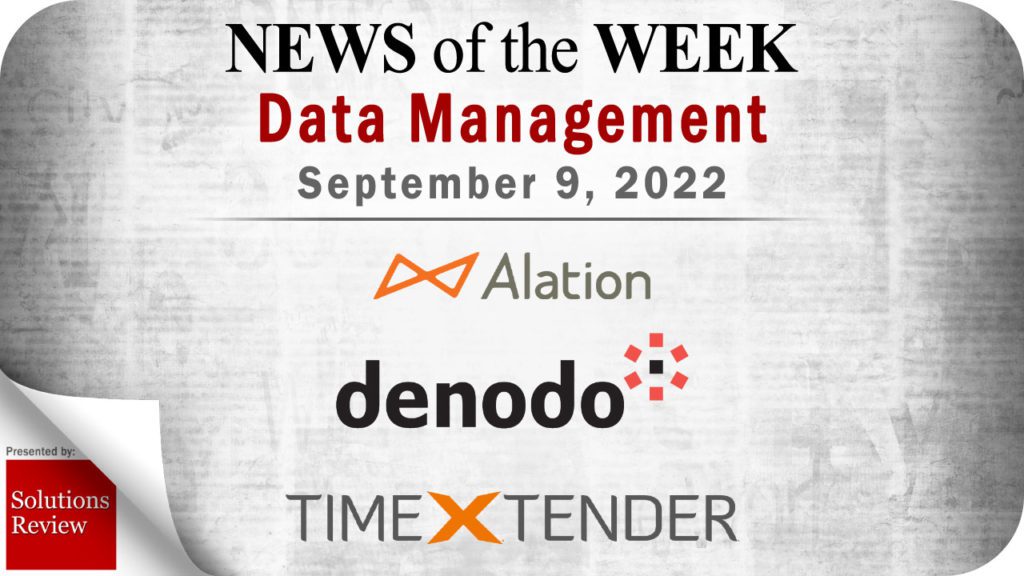